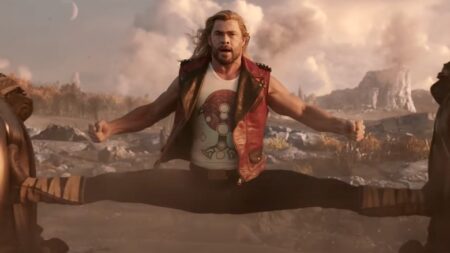 There are too many TV shows to keep up with these days, and as an avid cinephile, I tend to miss the majority of them. When you’re watching as many movies as there are days in a given week, it’s hard to find time to devote to a multi-episode saga. A matter of taste I guess, but even so, just the other day I saw a really fun episode of television called Thor: Love and Thunder. It’s a pretty long episode at just under two hours, but still considerably shorter than the other episodes of the show — a welcome reprieve.

The last we saw Thor was in the episode called Avengers: Endgame (I think — who can keep up?). The precocious demigod helped save the day, and now that Thanos (the villain of the previous season) has been destroyed, Thor passes his time cruising the galaxy and saving various days for various planets of various peoples. The episode begins as Thor is fighting alongside the Guardians of the Galaxy (minus Gamora, who died last season). It’s the type of silly sequence that feels right at home on this show: the Guardians aren’t doing so great, and then Thor steps in and uses his demigod strength and invulnerability to passively save the day while destroying everything in sight. He’s clueless about the damage he has done, hilariously so, tapping into the standard Thor characterization of “kinda dumb, but big hearted, and goddamnit he gets the job done.” It’s a wild sequence filled with big laughs, and it’s the first of many which occur over the next two hours (presented without commercials!).

Our villain comes in the form of Gorr (Academy Award winner Christian Bale), a lowly worshipper who, after meeting and being cast aside by his chosen god, decides to take vengeance upon ALL gods, including Thor and his friends.

This takes care of plot, but when it comes to story, Thor: Love and Thunder, as asserted by the silly narration from Korg, the rock man (voiced by Academy Award winner Taika Waititi), is a love story. We all remember Jane (Academy Award winner Natalie Portman), Thor’s long absent love interest from his first episode of the show. She’s back, and she’s about to get mixed up in the action as The Mighty Thor (Girl Thor). It’s explained how and why this occurs, but it doesn’t matter. What matters is that Academy Award winner Natalie Portman is now doing television, and when she swings her lightning hammer, it kicks ass.

There are battles, screaming goats, zips, zaps, and pew pews, and in one scene Academy Award winner Russell Crowe shows up and steals the whole damn thing.

Academy Award winner Taika Waititi directs (and co-writes alongside Jennifer Kaytin Robinson) and in doing so injects this episode of television with his inimitable sense of humor. This is true on both a script and visual level, and as a result Thor: Love and Thunder is often hilarious and never boring. Unfortunately, it’s also the filmic equivalent of McDonald’s food: hits the spot in the moment, fades from memory immediately upon completion, and was likely produced using a 3D printer.

Movies are easy to review, but episodes of television present quite the challenge. If you’re already watching this show you will continue watching this show. If you haven’t been keeping up this season, you almost definitely aren’t going to check it out. For the latter group, this “monster of the week” style episode, while not a great entry point, functions well enough in a vacuum that you won’t be lost if you decided to check it out. But for those seeking to further the lore of the series at large, you won’t find any of that here.

At the end of the day, Thor: Love and Thunder is a nice breather between ostensibly heavier episodes of this show that I can’t stop watching, and it provides a ton of really great laughs. Anymore, that’s all I can ask for this deep in such a long-running television series.

That’s what you said